New peer-reviewed, published research1 by Imperial Brands continues to consolidate its pre-clinical evidence in the ongoing vaping vs. smoking debate. myblu vape products may offer a significantly less harmful alternative for adult smokers who would otherwise continue to smoke. 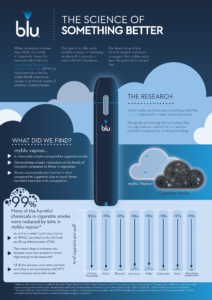 “In chemical terms, myblu vapour is relatively simple compared to conventional cigarette smoke – a fact directly reflected in the highly reduced toxicant levels and cellular damage across our in-vitro testing,” said the study author Kathryn Rudd, Pre-Clinical Toxicologist at Imperial Brands. “Aerosol chemistry and toxicological assessments are used to complement our clinical studies and they give a very good indication of a product’s potential to be less harmful than continued cigarette use, giving us the confidence to move into thorough clinical trials with adult smokers”.

Phase #1: To analyse the composition of the vapour, researchers measured 44 analytes including some of notable public health interest (such as toxicants and known carcinogens like carbon monoxide, formaldehyde and tobacco specific nitrosamines). The results were then compared to the levels found in conventional cigarette smoke. The difference was significant. myblu vapour contained up to 99% fewer toxicants compared to cigarette smoke. Of the 44 analytes assessed, only nicotine, aerosol collected mass5 (aerosol droplets) and water were found in quantifiable levels. 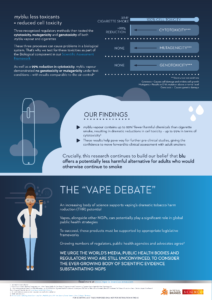 Phase #2: Three established in-vitro assays – Neutral Red Uptake (NRU), Bacterial Reverse Mutation (AMES) and the In Vitro Micronucleus (IVM) were then used to compare the relative cytotoxicity, mutagenicity and genotoxicity of myblu vapour versus conventional cigarette smoke. Together, the assays showed the reductions in toxicants in myblu vapour directly translated into a significant reduction in in-vitro toxicity. In fact, myblu vapour was over 99% less cytotoxic and displayed no mutagenic or genotoxic effects under the testing conditions.

The research, summarised in this infographic, is an important stepping stone for Imperial Brands’ continued and ongoing commitment to rigorous, peer-reviewed science. It demonstrates that myblu holds substantial potential for harm reduction at a population level, if adopted by millions of adult smokers as an alternative to conventional cigarettes. The findings also underline the vital importance of regulatory frameworks that embrace tobacco harm reduction.