//Snus and the EU – a golden public health opportunity?

Many people – adult smokers and non-smokers alike – may well ask: ‘what is snus?’

Even though the oral tobacco product has been around for several centuries, it’s largely unknown, and misunderstood, outside of its native Scandinavia.

The EU’s current ban on snus – with only Sweden exempted – hardly helps.

But don’t just take our word for it

Independent public health experts have concluded snus is between 95-99% less harmful than cigarettes.

Focusing on specific smoking related diseases, particularly those associated with the lungs, substituting cigarettes for snus drives staggering reductions in risk – nearly 100% in the case of lung cancer, COPD and pneumonia.

Our recent scientific literature review comprehensively investigated the independent data surrounding the product, and we created an accompanying infographic to explain more. Click on each page below to open it in a new tab. 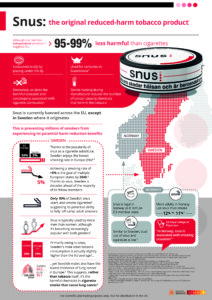 Our review contained data that – crucially – is largely clinical in nature and has been gathered over decades. The findings, primarily from Sweden, are incredibly encouraging. For instance:

So, an objective examination of the data can only lead to one conclusion: snus should be officially regarded as a harm reduced tobacco product.

The UK Royal College of Physicians agrees, as does the US FDA. Even the EU’s own Scientific Committee on Newly Identified Health Risks has gotten in on the act – which seems rather ironic given their ban, put in place in 1992, continues to endure.

Back then, a relative lack of long-term data meant it could almost be justified.

Now, it’s nothing less than a mass dereliction of duty to European public health. 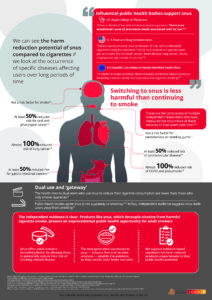 As a consumer product, snus offers a genuine alternative for those adult smokers who either don’t find NRTs effective or see themselves as patients.

Paired with high quality manufacturing standards and adequate restrictions to prevent unintended use by youth or non-smokers, the potential of snus to make a significant and positive impact on public health is surely now obvious.

Achieving a smoking rate of less than 5% is the goal of multiple EU member states by 2025.

No-one is currently anywhere near achieving this – apart from Sweden.

Surely, it’s time for the EU to recognise their mistake and ensure that – moving forwards – their policies reflect objective, rigorous scientific data.

Then, finally, millions of adult smokers across 27 member states will be granted access to a product which could have a significant impact in reducing their risk of developing smoking related disease.