Last month, Imperial Brands released one of our most complex in-vitro assays completed to date. The study was presented at the Society for Research on Nicotine and Tobacco’s (SRNT) 2020 annual meeting held Mar 11-14 in New Orleans, Louisiana.

Travel disruptions caused by COVID-19 meant that this year many participants were unable to attend the conference in person.

SRNT is a global organisation dedicated to supporting researchers, academics and government professionals in the discovery and communication of new research on nicotine, in all its forms. In the US, the SRNT works directly with government agencies including the FDA’s Centre for Tobacco Control and NGOs such as the American Cancer Society.

Dr Liam Simms, our Principal Toxicologist, submitted his poster digitally which you can view below. Click to open it in a new tab. 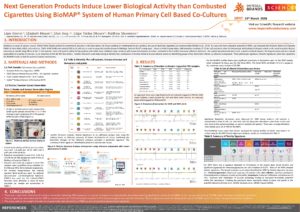 The study employed the BioMAP system which uses a selection of human primary cells from different areas of the body to test the actions of different chemicals on biomarkers in each cell system.  Biomarkers are molecules that indicate normal or abnormal processes taking place in the body, which may be a sign of an underlying condition or disease.

Cigarette smoke was compared to aerosol from a range of different NGPs, including myblu. Biomarker profiles were further analysed to identify known mechanisms of action (MoA) − processes which describe the cellular biochemical response to different compounds, which have known effects to the body, and can potentially lead to disease. Specifically, the BioMAP system uses a Toxicity Signatures Analysis to identify changes in three to five key biomarkers per MoA.

In contrast, none of the NGPs, including myblu, caused any toxicity signatures during the same testing regime.

The study suggests that myblu and other NGPs are likely less toxic than cigarette smoke, adding to the weight of evidence that suggests these products are a potentially reduced harm alternative for adults who would otherwise have continued to smoke.