//How does exhaled heated tobacco aerosol behave in the air?

Considerable research informs the dynamics of exhaled e-cigarette aerosols, but how much do we know about the same processes for heated tobacco? Liz Mason picks over the particles.

The premise of heated tobacco (HT) is simple: tobacco leaf is heated, never burnt, so avoiding many harmful by-products of combustion for the user. The exhaled ‘mist’ is correctly termed an aerosol, which is almost invisible and far less dense and pungent than the exhaled smoke from combustible cigarettes. 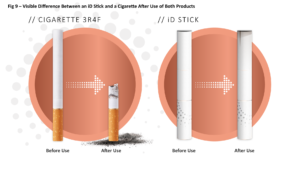 Heat-not-burn: Heated tobacco does not combust like a cigarette. Image: Imperial Brands

Another advantage of HT is that there are no ‘side-stream’ emissions to impact air quality (or disturb bystanders – these emissions form part of the ambient smoke that’s often known as environmental tobacco smoke (ETS) or ‘second-hand’ smoke), because unlike a combustible cigarette there is no constantly burning tip. Our previous research suggests that, unlike cigarettes, using our Pulze heated tobacco device causes no discernable negative impact on indoor air quality (IAQ).

As the HT category grows in popularity as a potentially less harmful alternative to combustible cigarettes amongst adult smokers, there will likely be a desire for more information about how exhaled HT aerosol behaves around both users and bystanders. For these reasons we commissioned an independent research study undertaken by leading EU air quality researchers at the Kaunas University of Technology, Lithuania, to find out how our HT device Pulze’s exhaled aerosol behaves in terms of spatial and temporal dynamics compared to combustible cigarette smoke.

The results, published in the peer-reviewed journal Aerosol and Air Quality Research, demonstrate:

Overall, the results demonstrate the exhaled aerosol produced using Pulze is very different in terms of chemical composition and spatial and temporal dynamics, and does not impact IAQ in the same way as cigarette smoke. This further validates the air quality and broader potential tobacco harm reduction credentials of the HT category compared to combustible cigarette smoke.

How was this research conducted? Study lead Professor Dainius Martuzevicius from the Department of Environmental Technology, Kaunas University of Technology, Lithuania, explains:

“To measure particle dynamics in controlled conditions, an indoor test chamber representing a standard room was used (see diagram), with 13m2 of floor area and a total volume of 35.8m3. A dummy bystander with a sampling inlet to replicate breathing was used to record the air and particle number concentration (PNC) and particle size distribution (PSD). These were measured by a Fast Mobility Particle Sizer (FMPS) spectrometer. Four-way mixing ventilation was chosen for this study because it is commonly used in residential buildings.”

To conduct the experiments, either a Pulze HT device with accompanying tobacco consumable iD  stick or combustible cigarettes were used by volunteers standing 0.5, 1m or 2m from the dummy bystander, with a total of 108 runs made to collate data. 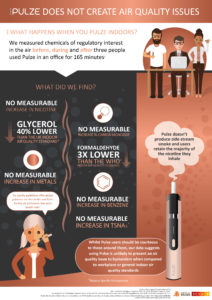 At 1m and 2m the effect of a puff is significantly diminished because the aerosol is diluted and dispersed as it moves around the room. At 2m, only a very directional puff towards the bystander elevates the aerosol concentration.

HT and vaping have no discernable negative impact on IAQ as measured using national and international IAQ guidelines. This is in contrast to combustible cigarettes, use of waterpipes, as well as many other indoor pollution sources, including incense burning and mosquito coils (see Table 2).

Science shows that HT indoor aerosol particle dynamics are fundamentally different from cigarette smoke. The HT exhaled aerosol is mostly composed of water droplets, and as such they do not linger as long in the air, and so do not exceed IAQ standards and guidelines, especially when compared to cigarette smoke. 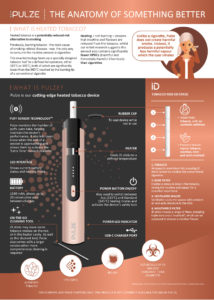 This is positive news, and confirms findings by other researchers that have shown toxicant levels in exhaled HT aerosol are significantly lower than in cigarettes, with levels of some exhaled compounds indistinguishable from normal background levels, if detectable at all.

Overall, our scientific substantiation to date indicates that indoor Pulze use is unlikely to present an indoor air quality issue or risk to bystanders, especially compared to existing background levels of toxicants, indoor air quality standards and pollutants in urban areas.

“These results further confirm that use of HT products should be permitted in indoor spaces, but users should be courteous to those around them,” adds Dr Grant O’Connell, Head of Tobacco Harm Reduction Science at Imperial Brands. “The findings also add to the body of evidence that heated tobacco products have an important part to play in making a meaningful contribution to potential tobacco harm reduction.”