BEHIND THE HEADLINES IS A REGULAR FEATURE TAKING A SLIGHTLY DEEPER DIVE INTO A PIECE OF RECENT MEDIA COVERAGE OF NGP RESEARCH.

Responding to a recent scientific review on vapes conducted by the UK Committee on Toxicity of Chemicals in Food, Consumer Products and the Environment (COT) in mid-September 2020, some  media reports warned “e-cigarettes CAN worsen heart and lung conditions and must not be considered harmless, Government report finds.” COT is an independent scientific committee providing advice to government departments and agencies concerning the safety and toxicity of chemicals.

However, the article’s headline and tone is at odds with alternative readings of the same report from Public Health England’s (PHE) and other leading public health specialists quoted for the Science Media Centre (SMC). As tobacco control expert, Martin Dockrell said “e-cigarettes aren’t risk free but they are far less harmful than smoking. COT’s review of the health risks of e-cigarettes adds to the scientific evidence that supports this view.” 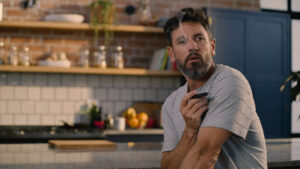 E-cigarettes have been the subject of many scientific papers and reviews in 2020. Image: Imperial Brands

The media headline misrepresents key findings of the COT report, focusing on absolute rather than relative risk and appearing at odds with the current scientific consensus suggesting vaping be an effective harm reduction tool for adult smokers who would otherwise continue to smoke.

As COT chair Dr Alan Boobis states: “our assessment on e-cigarettes largely reinforces the scientific consensus to date on their relative safety [emphasis added], that while not without risk they are significantly less harmful than smoking.”

Adding to the evidence, just one month later, a landmark Cochrane Review –  generally considered the gold standard for scientific evidence – determined vaping was not associated with serious unwanted effects or harm with up to two years’ usage.

The COT report and the Cochrane Review make it abundantly clear: the current scientific consensus shows vaping has clear harm reduction potential. Despite the reassurance this message could have provided to thousands of adult smokers, the news article skated over this point, and omitted independent comments from scientists speaking to the SMC on the issue.

What is the COT report and what did it find?

Originally requested by the Department of Health and Social Care and PHE, the COT report was conducted to assess the current scientific evidence of toxicological risk from vape use to aid smoking cessation.

Considering the totality of the available evidence in the scientific literature, the first section examined constituents that may by present in vape aerosol. The second section focused on toxicological and epidemiological studies of potential risks to both vapers and bystanders.

What was the scientific community’s reception to the report?

Numerous researchers from various academic fields across the UK were supportive of the review’s findings.

Prof John Britton of the University of Nottingham (and former Director of the UK Centre for Tobacco and Alcohol Studies) said the report provides a “welcome, authoritative reassurance that for smokers who find it difficult to quit smoking, vaping is the obvious next best option.” 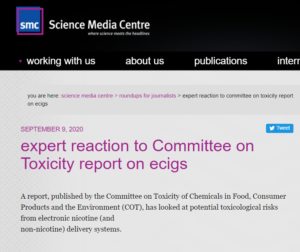 Expert reaction to the COT report from the Science Media Centre did not always make it into media stories. Image: SMC

Commenting on vaping’s impact on cardiovascular risk, Prof Jacob George, Professor of  Cardiovascular Medicine and Therapeutics at the University of Dundee, pointed out: “most e-cig users are former tobacco smokers. When longitudinal data is examined, e-cig users may demonstrate an increased cardiovascular rate above and beyond non-smokers, but how much of this is due to the prior effects of tobacco smoking is unknown.”

“The two key points that this report should have highlighted are that the cardiovascular event rate for e-cig users may be higher than non-smokers, but [1] it has repeatedly been demonstrated to be lower than tobacco cigarette smokers, and that [2] the impacts seen in e-cigarette users may also be due to prior tobacco use,” George continued.

In 2019, George published research funded by the British Heart Foundation showing long-term adult smokers who transitioned to vapes experienced rapid positive developments in vascular health compared to continued smoking. Within just one month, there was clear improvement in the ability of adult smokers’ arteries to dilate, endothelial function, and vascular stiffness compared to continued smoking, with females benefiting most from transitioning.

Our view on the COT paper and its reporting

We firmly believe Next Generation Products (NGPs) like vapes have an important role to play in tobacco harm reduction. After all, they’ve already helped millions of adult smokers worldwide reduce or replace their combustible tobacco consumption.

Vape aerosol contains fewer and substantially lower levels of harmful chemicals compared to tobacco smoke, and clinical studies with adult smokers have demonstrated when they transition to vaping they experience rapid and significant reductions in exposure to toxicants and carcinogens – not dissimilar to the levels in found in nicotine replacement therapy (NRT) users and never smokers. Clinical data has shown adult smokers who transition to vaping have generally experienced improvements in pulmonary and cardiovascular health.

As previously mentioned, the recent Cochrane Review shows that [1] e-cigarettes do help people to transition away from smoking (even among those who do not intend to quit smoking) and work better than NRTs or willpower alone and [2] and are not associated with serious unwanted effects or harm with up to two years of usage.

The totality of the scientific and medical evidence to-date is reassuring for adult smokers considering vaping as an alternative to combustible tobacco. The COT report adds to this literature, providing a comprehensive analysis considering the relative risks and benefits – the most relevant comparison for adult smokers.

However, as the Cochrane Review states, more research is needed to substantiate vaping’s longer term harm reduction potential. Imperial Brands agrees and our scientific research in this area continues.

As well as providing clear evidence of vaping’s harm reduction potential, the COT report includes one of the first published risk assessment processes for e-liquid favour testing. At Imperial Brands, our team of professional, highly-qualified registered toxicologists assesses every e-liquid ingredient in our vapes to ensure they’re high quality and suitable for use by adult smokers. We believe all vape manufacturers should be held to the same high standard. Though our existing internal process (summarised here and on the image to the right) is more stringent, the COT proposal provides an important tool for promoting e-liquid safety and quality across the industry.

Our view on the news article

In communicating the COT’s findings, the media report had the chance to inform and reassure those adult smokers who may consider vaping as an alternative to combustible cigarette smoking.

It’s a shame this opportunity was missed.

As well as misrepresenting the study’s findings by focusing predominately on absolute risk without appreciating the harm reduction potential compared to continued combustible cigarette smoking, the article’s claim that: “the number of young people who vape is rising” was also misleading. In fact, a major 2019 study found: “while some young people – particularly those who have tried smoking –  experiment with e-cigarettes, regular use remains low.”

In fact for the first time since recording began in 2010, Action Smoking on Smoking and Health’s (ASH) latest survey data reveals a worrying fall in UK vaping numbers. The charity warns: “unfounded concerns of health risks” mean “smokers who could benefit from switching completely are missing the chance”.

Ultimately, sensationalist headlines, and others stories of this ilk, may be partially responsible.