Sarah Weaver, Science Academy Senior Manager, delves into the world of nicotine – arguably among the most controversial chemicals on the planet. But is this reputation entirely justified?

Nicotine is arguably one of the most stigmatised and misunderstood chemicals in public debate.

If misperceptions around the harm potential of nicotine – and its intricate relationship with smoking – endure they could potentially pose a serious threat to the promotion and facilitation of tobacco harm reduction on a global level.

For adult smokers to feel reassured by our portfolio of Next Generation Products (NGPs), we believe it’s important to have a frank and honest discussion about the nicotine contained within them.

In this new infographic and blog post, we break down the basics of nicotine while tackling some fundamental questions – including ‘Where does it come from?’, ‘How does it work?’, ‘Is it harmful?’ and ‘What are its effects?’

Where does nicotine come from?

Nicotine is a naturally occurring compound produced by the nightshade family of plants to protect themselves from insects.

The compound is present in aubergines, peppers, tomatoes and potatoes, although in much lower levels than those found in tobacco. 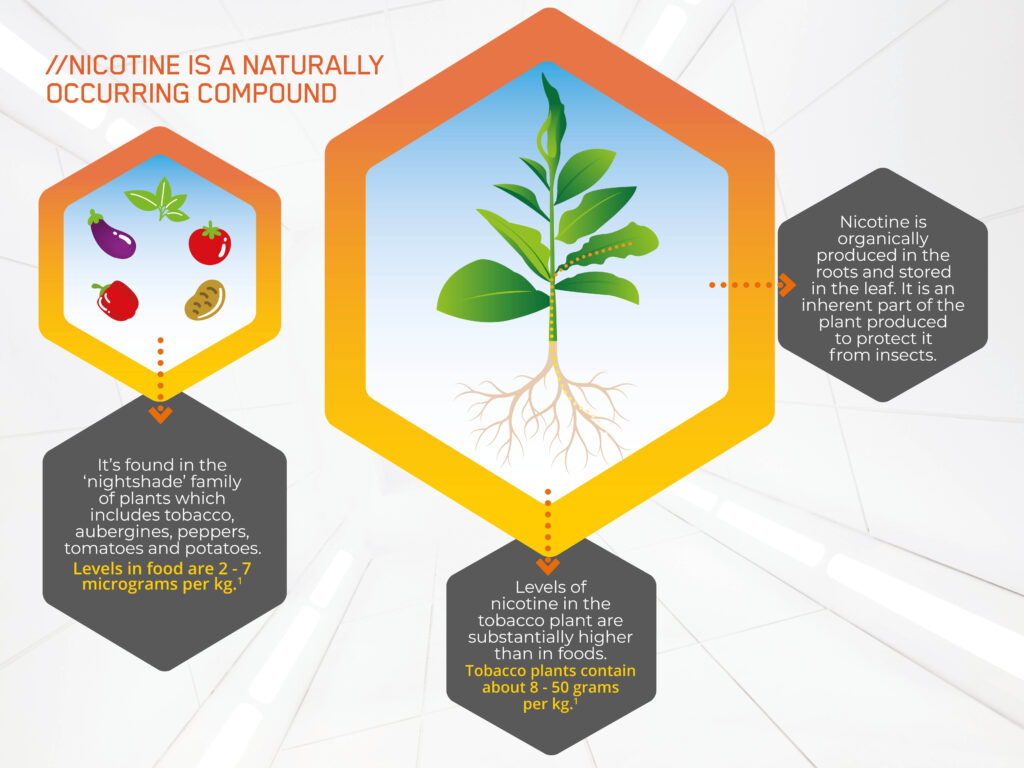 What about the nicotine in our products: where does that come from?

Actually, it varies across our portfolio, as these images explain. 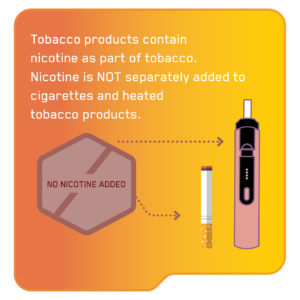 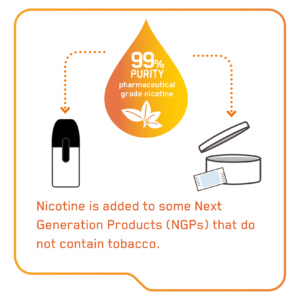 This nicotine we add to our vape e-liquids and tobacco-free oral nicotine pouches is pharmaceutical grade. Extracted as a clear liquid from tobacco leaf, it’s the same high quality and purity as the nicotine used in traditional ‘over-the-counter’ pharmaceutical and medically licensed products.

How is it consumed? 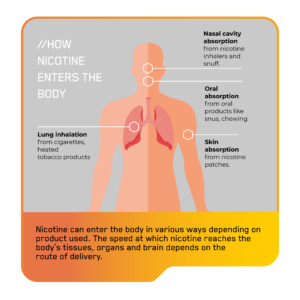 Nicotine can enter the body in various ways, depending on the product used. In turn, the route of delivery impacts the speed at which nicotine reaches the body’s tissues, organs and brain.

The adjacent image shows the various ways in which nicotine can enter the body.

How does nicotine work?

Part of nicotine looks very similar to a chemical messenger (acetylcholine) that naturally occurs in our bodies and plays an important role in alertness, attention, learning and memory. 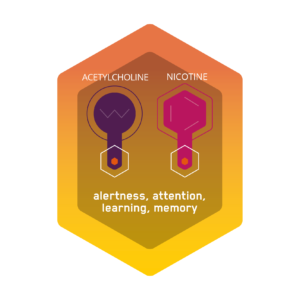 Nicotine binds to the same receptors in our bodies as acetylcholine, mimicking its action.  In adult smokers, nicotine has similar effects to acetylcholine.

What are the reported effects of adult consumption?

Nicotine is considered a mild stimulant and produces a broad range of physical effects. These effects are transient and not dissimilar to those experienced when drinking coffee or watching a horror movie.

Although it is a stimulant, nicotine can have different effects. Adult users report small doses can lead to alertness, and larger doses to relaxation.2 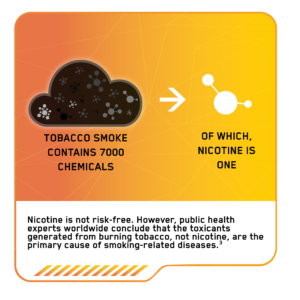 There are around 7,000 chemicals in tobacco smoke, of which nicotine is one.

Nicotine is an addictive substance and is not considered to be risk-free. That said, public health experts worldwide have concluded the toxicants generated from burning tobacco, and not nicotine, are the primary cause of smoking-related diseases. 3

Decoupled from tobacco smoke, nicotine’s  long-term safety profile has been established through years of pharmaceutical clinical trials and decades of ‘over-the-counter’ use.

Like many substances, at high doses nicotine can be poisonous. However, it is not poisonous at the intended levels typically consumed by adult NGP users.

Many foods contain trace levels of poisonous chemicals – no diet is free of them. 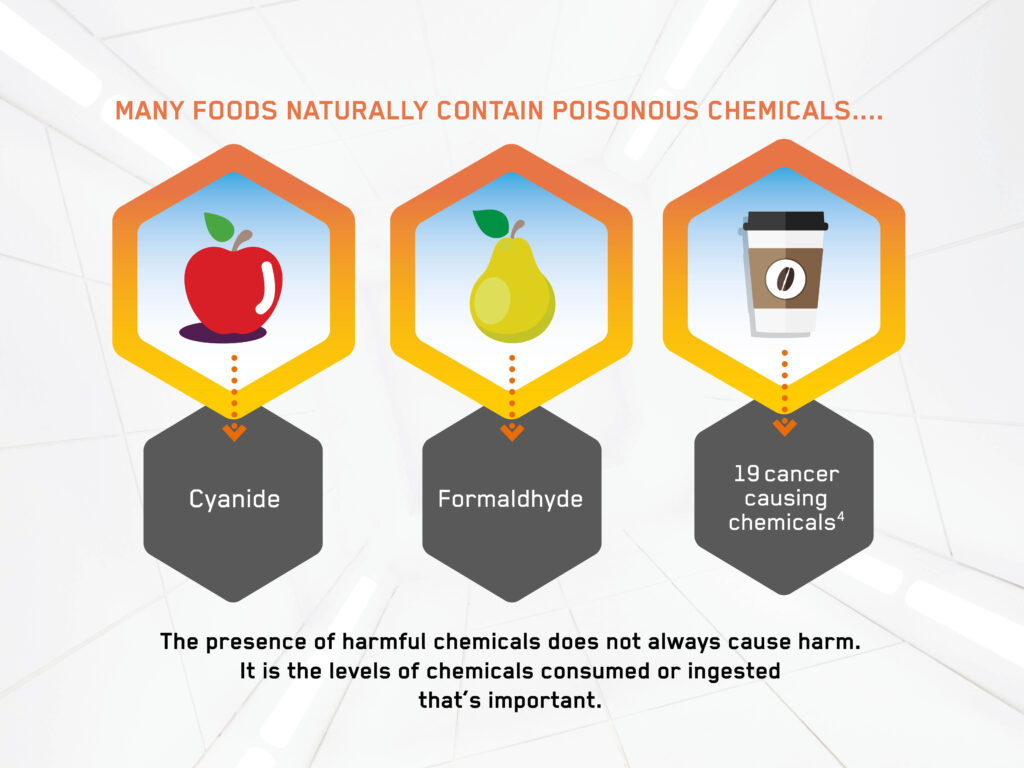 The presence of a harmful chemical doesn’t inherently cause harm ­– it’s the level ingested or consumed that’s important. This ‘the dose makes the poison’ principle has been central to medical practice for centuries.

What are the endpoints associated with nicotine use?

However, others also report nicotine:

That said, we are unequivocal that youth, pregnant women, and people with diabetes should not use nicotine products, and we strongly support youth access prevention efforts. 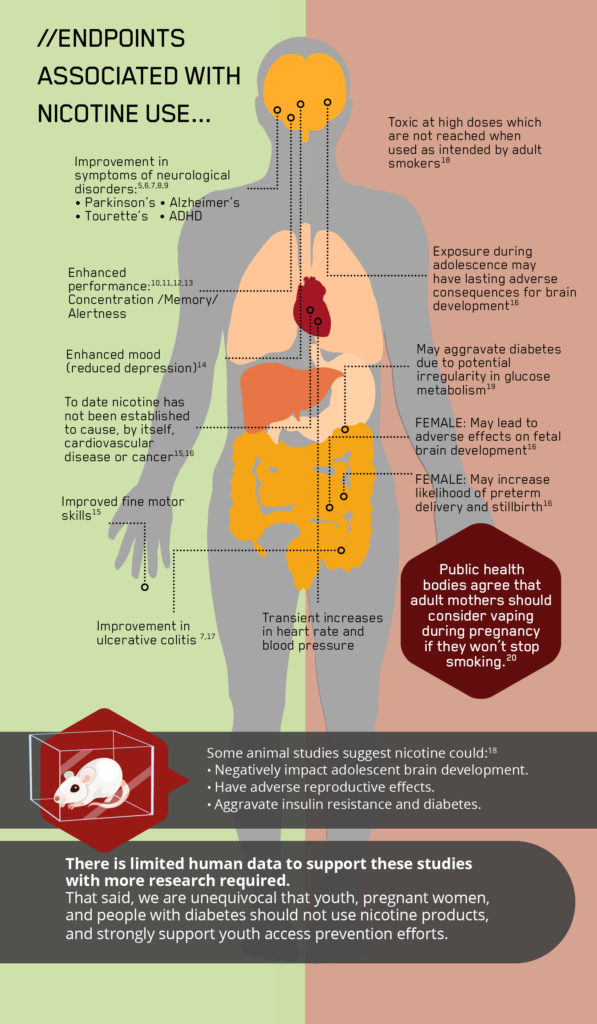 With this in hand, adult smokers will be much better equipped to make informed choices about transitioning to potentially harm-reduced nicotine products, compared to the health risks of continued cigarette use.

To find out more about nicotine, check out our official scientific position and 7 Things You Never Knew About Nicotine blog post.