//Pulze: The science of heat not burn

“People smoke for the nicotine but die from the tar” Professor Michael Russell, 1976.

It’s almost 50 years since Russell first started advocating the public health principle of tobacco harm reduction (THR), yet smoking cigarettes is still how more than one billion people across the globe continue to consume nicotine.1

Once lit, the tobacco in a cigarette reaches about 900°C at the tip. When tobacco burns, it creates light and smoke, which are both visible to the naked eye. It also releases thousands of invisible chemicals. Around 100 of these, termed Harmful and Potentially Harmful Constituents (HPHCs), are thought to be the primary cause of smoking-related disease.2

One of the reasons many smokers enjoy cigarettes is that they like nicotine and the flavour of tobacco. A complex set of behavioural and sensorial rituals, like the hand-to-mouth movement or the process of exhaling smoke can also make smoking a pleasurable experience for many.

We’re looking to provide adults, who would otherwise continue to smoke, with less harmful alternatives that deliver nicotine satisfaction alongside these cues and rituals.

One of these is our Next Generation heated tobacco (HT) device, Pulze.

The premise is simple. By heating – without burning – a portion of refined tobacco contained within a stick (named iD), Pulze creates an inhalable aerosol. This contains nicotine and tobacco aromas, with substantially fewer and lower levels of the harmful by-products of tobacco combustion.

Pulze uses a cylindrical, ceramic rod that gently heats the tobacco to a pre-set temperature, 315 °C in Eco mode and 345°C in Standard mode. This rod penetrates the iD stick, warming the tobacco stick from the inside outwards. 3

To understand what combustion is, it’s a good idea to look at the principles of fire safety.

Three elements are necessary to create the chemical process of combustion: heat, fuel and oxygen. In a cigarette, tobacco acts as a fuel which ignites using a high-temperature heat source (usually from a lighter). The tobacco relies on oxygen in the air to burn, creating the by-products heat, light, smoke and ash. Fig 1 below explains this process. 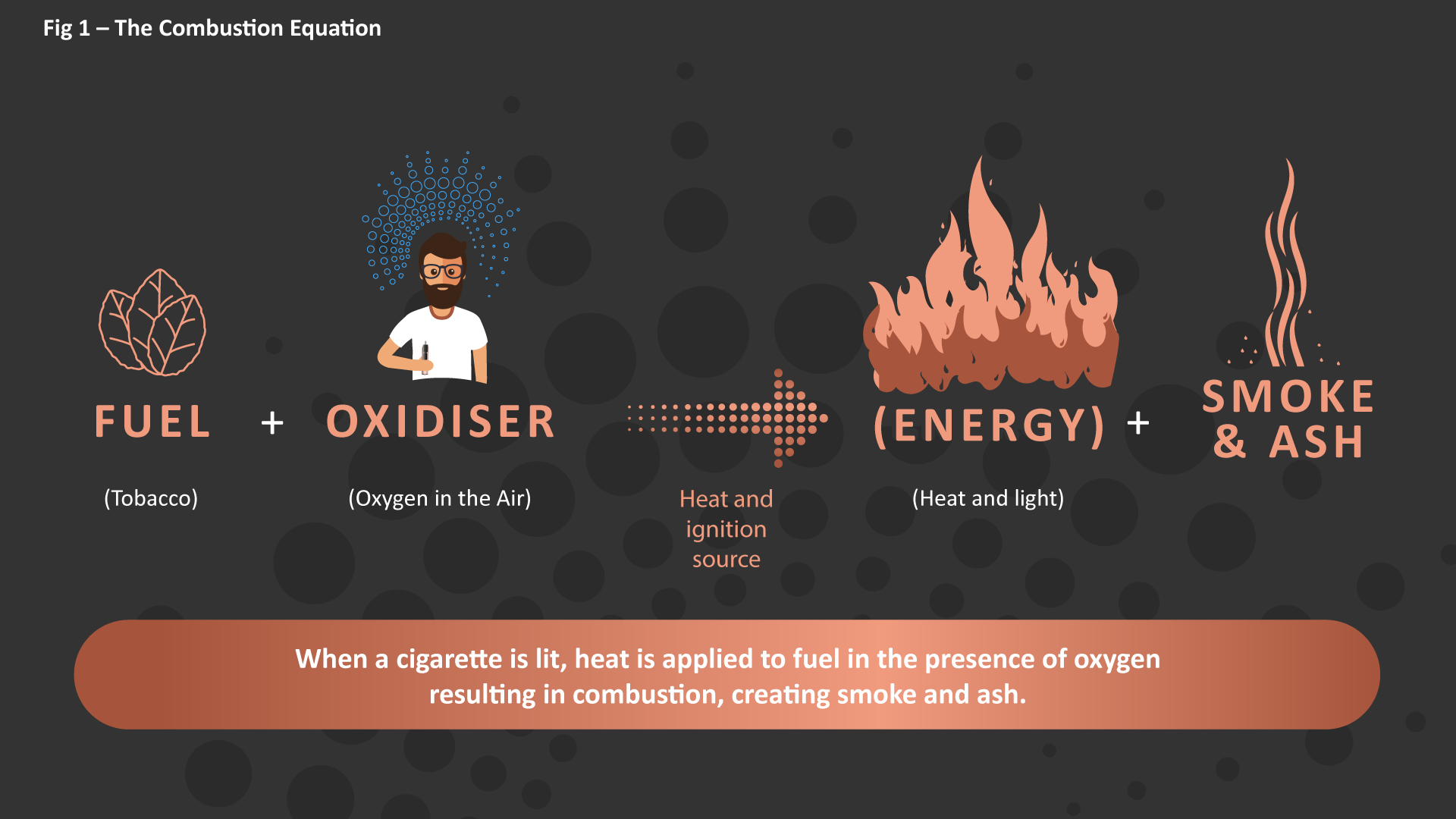 However, combustion isn’t the only form of thermal degradation.

As illustrated in Fig 2 below, evaporation, torrefaction and pyrolysis are phases of thermal decomposition that happen before combustion. You probably see products of these processes every day: 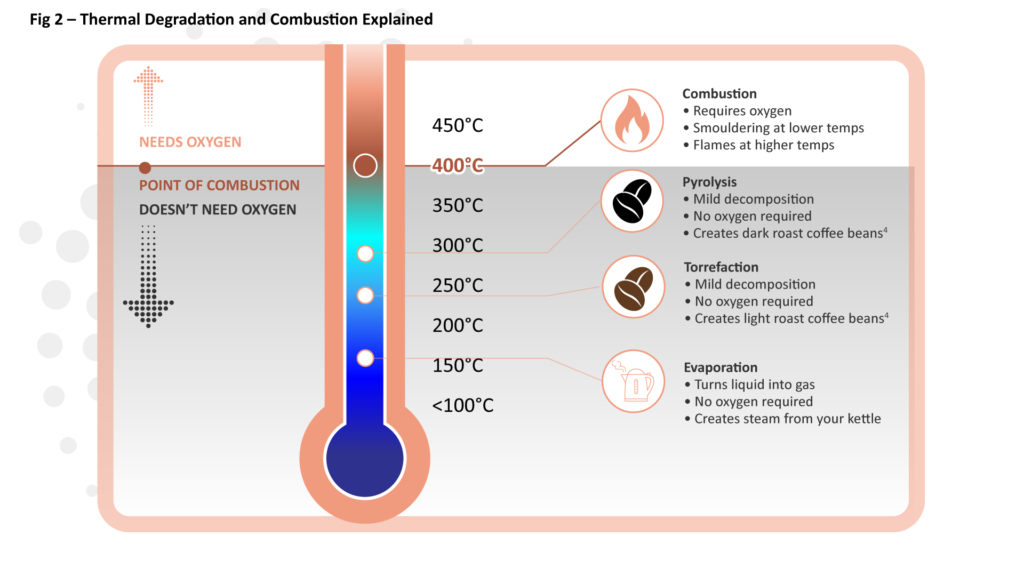 Each of these processes occur at lower temperatures than combustion. Although they require fuel and heat, they don’t require oxygen.

As mentioned above, combustion needs all three – heat, fuel and oxygen. It’s also the only stage that involves visible ‘burning’.

How can we be sure our HT device doesn’t cause combustion? In other words, how do we know Pulze produces an aerosol and not cigarette-like smoke?

We conducted four tests. The results summarised in this video and post below, all point to the same conclusion: Pulze doesn’t create combustion.

As heat is applied to a fuel source a chemical reaction takes place, creating new by-products while also consuming fuel.

This is true for all stages of thermal decomposition – including evaporation, torrefaction and pyrolysis – processes that happen at lower temperatures than visible burning.

When combustion occurs, however, the fuel is depleted at an even faster rate because it reacts with oxygen causing a high energy reaction that releases heat and light.

Using this knowledge, we employed thermogravimetric analysis to establish at what temperature the tobacco and paper wrap used in an iD stick would start to combust.

To find out we did two tests. As Fig 3 shows, in each we placed the iD stick’s tobacco segment (both the tobacco and paper wrap) in different atmospheric conditions and measured its mass as we slowly increased the temperature.

In Test #1 the tobacco segment was immersed in oxygen to facilitate combustion.

In Test #2 the tobacco segment was immersed in nitrogen to suppress combustion. 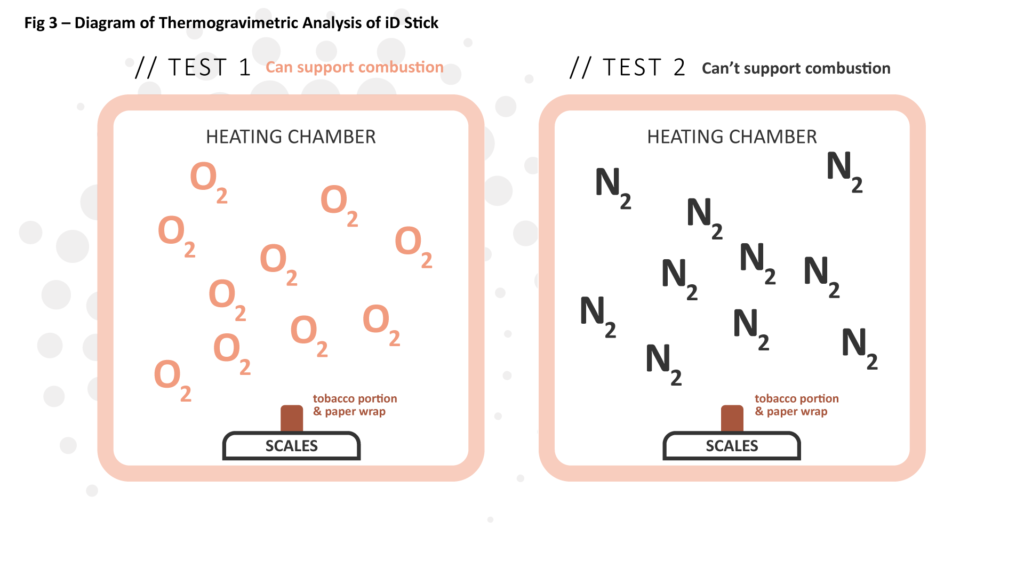 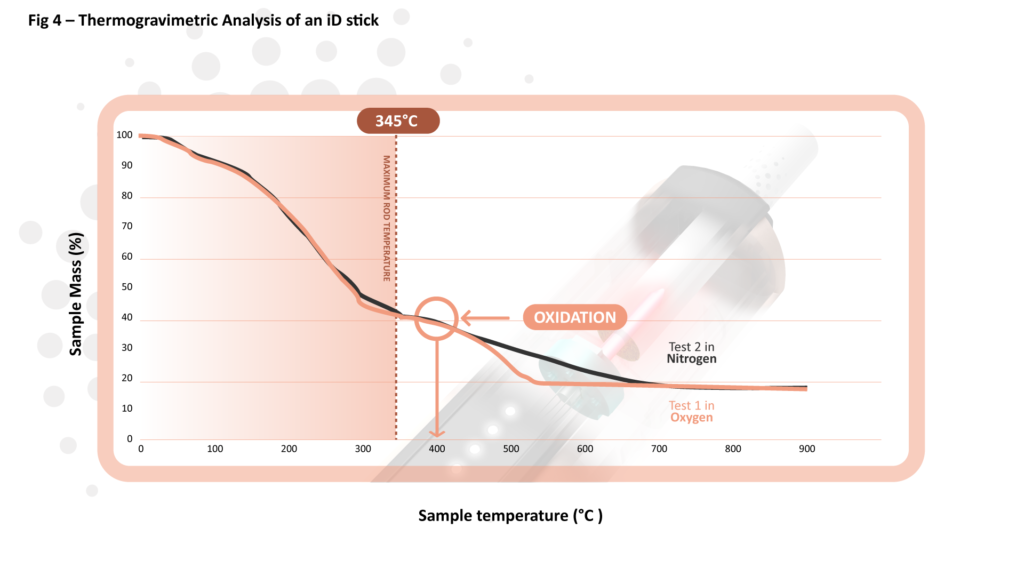 Fig 4 compares the results of Tests #1 and #2. The deviation in mass at >400°C indicates the point of oxidisation and the start of combustion.

Pulze doesn’t cause combustion because it simply doesn’t reach temperatures anywhere near 400°C, let alone the temperatures seen at the burning tip of a conventional cigarette.

As mentioned earlier, the rod heater’s maximum temperature is around 345°C. However, in reality, even at its hottest point (closest to the device’s heater), the tobacco only reaches around 240°C. This is shown in Fig 5 and 6. 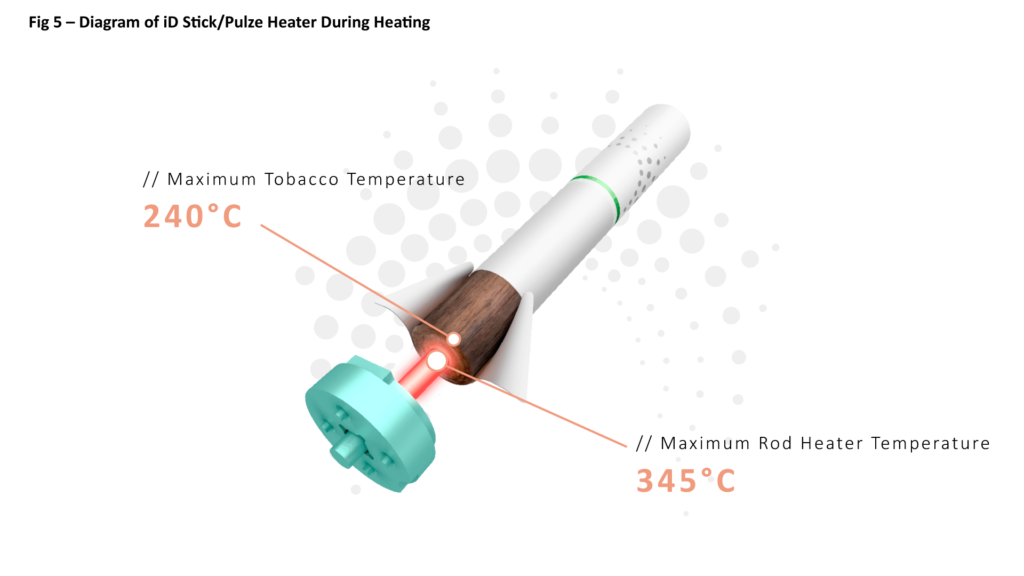 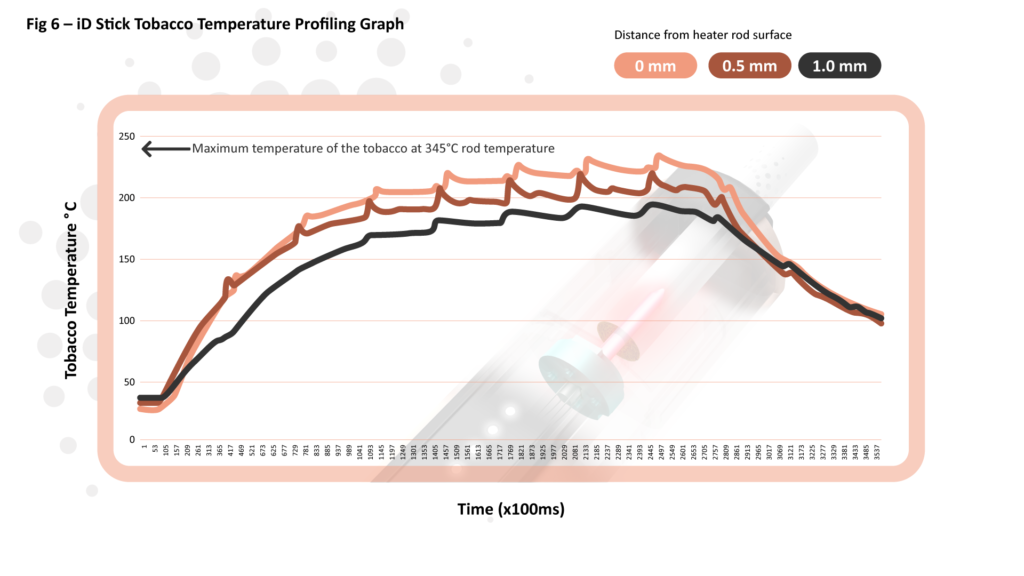 Fig 6 shows the temperature of the tobacco inside an iD stick when Pulze is used on standard mode (345°C). The closer to the heater, the hotter the tobacco gets.

So, Pulze doesn’t reach temperatures hot enough to cause burning. The nicotine-containing aerosol it generates from tobacco is therefore the result of evaporation, torrefaction and some low-temperature pyrolysis − not combustion.

Combustion is a chemical process where reactants (fuel and oxygen) produce other chemical products called gaseous oxides. Examples include carbon monoxide and nitrous oxides that are always produced when organic material, like tobacco, burns. These gases result from combustion, so we call them combustion markers.

When we compare Pulze aerosol to cigarette smoke 5 as illustrated in Fig 7, we see a significant reduction in these combustion markers in the aerosol. This is further strong evidence indicating the absence of combustion. 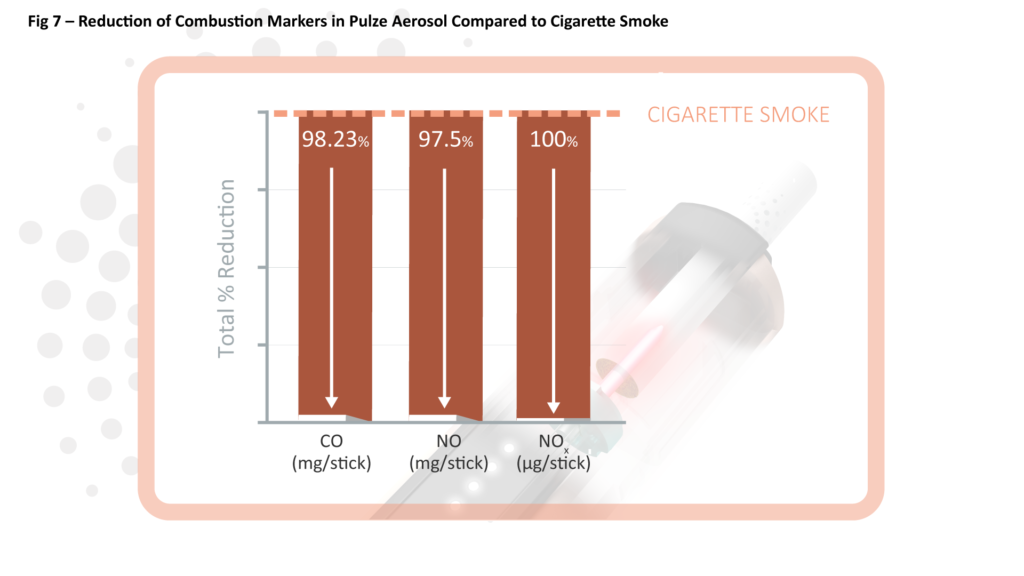 When tobacco burns, as well as combustion markers it also creates thousands of other by-products including HPHCs.

The World Health Organisation (WHO) Tob Reg 6 identifies nine toxicants that must be reduced in cigarette emissions. When we measure the levels of these specific HPHCs in Pulze aerosol, as Fig 8 illustrates, we see a 96% reduction compared to levels found in those in conventional cigarette smoke.7 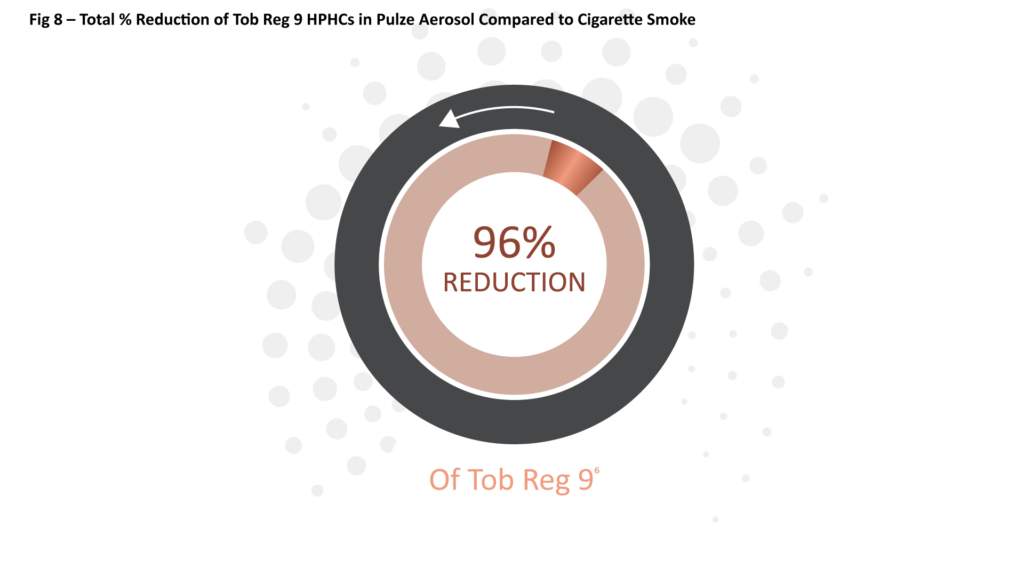 4. Look at the difference in front of your eyes

Visually, a cigarette and iD stick look very different after use. As a cigarette burns, it produces ash and smoke and becomes a small, charred butt.

A used iD stick remains intact with little to no reduction in size. It’s only visible degradation is a slight discolouration: it appears ‘toasted’, much like a roasted coffee bean, as shown in Fig 9. 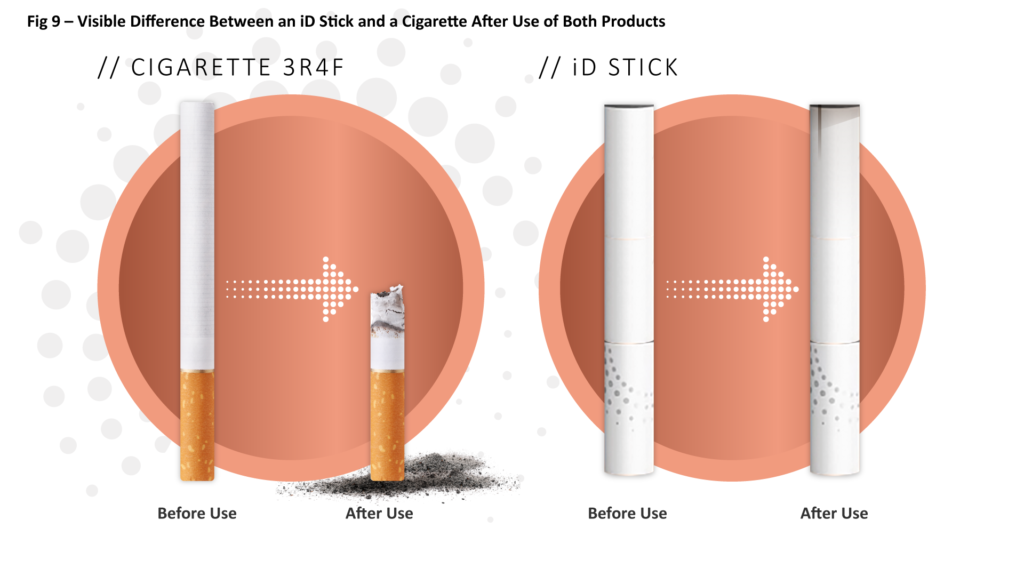 As summarised in the video below, all four tests create a weight of evidence – Pulze heats without burning.

So, without combustion, how does HT create an aerosol?

Again, let’s look to the chemistry. Gentle heating causes evaporation, torrefaction and mild pyrolysis, which causes the tobacco to release an inhalable aerosol.

Although nicotine’s boiling point is around 247°C, the chemical will start to evaporate at temperatures slightly lower than this level. By reaching these temperatures Pulze allows nicotine – alongside flavourings and aromas – to be released from the tobacco. Pulze does all this at temperatures three times lower than the burning process in a conventional cigarette.

By eliminating combustion and minimising thermal conversion, Pulze aerosol gives adult smokers the nicotine and flavours they desire along with the cues and rituals linked with smoking – all via potentially less harmful means.

Almost 50 years after the principle of THR emerged, science suggests there are now viable alternatives to burning tobacco leaf to consume nicotine.

As the US Food and Drugs and Administration (FDA) argues “tobacco products exist on a continuum of risk, with combustible cigarettes being the deadliest.”8

A growing scientific evidence base supports this position. The UK Committee for Toxicity 9 concludes that there’s “likely a reduction in risk for conventional smokers” who use HT instead of smoking cigarettes. New Zealand’s Associate Health Minister 10 and Public Health England (PHE) 11 also recognise the harm reduction potential of heat-not-burn technology, as PHE argues heated tobacco may be “considerably less harmful than smoking”.

We agree and firmly believe that, with ongoing scientific substantiation, the public health potential of NGPs like Pulze is significant.