//TT21C: the future of biological testing?

Arran Frood: What is TT21C all about?

Liam Simms: TT21C – or the rather wordier Toxicity Testing in the 21st Century – is essentially a blueprint for the future of toxicity testing within regulatory frameworks and for product stewardship assessments.

About two decades ago, the US National Research Council (NRC) began to recognise the rapid advances in both biology and biotechnology. In 2007, the NRC officially outlined a long-range vision and strategic plan to advance toxicity testing via methodologies that evaluated changes in biological processes using cells, cell lines or cellular components of human origin – rather than traditional in vivo methods using live animals. 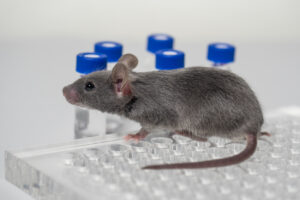 There is a widespread movement to use far fewer whole animals in research in laboratories across the world.

LS: Right. Historically, to test the toxicity of a substance like a new drug to the human body, firstly you’d examine its effect on other living things via pre-clinical studies. Then, if no significant issues were observed, you’d likely proceed to human clinical trials. In traditional pre-clinical toxicity studies, laboratory animals are exposed to high doses of a substance under controlled conditions. These animal test dosages are then extrapolated to reflect their potential impact on humans.

While animal testing has been prevalent in biological research since the 1950s, there’s been little in vivo innovation over the years, meaning scientists are still conducting similar studies to those used almost 70 years ago. This is surprising considering animal testing isn’t a completely efficient or reliable tool for research. For instance, it takes a long time to conduct, and scientists often have to rely on guesswork to extrapolate the results to humans. This may result in drug-related adverse event/side effects.

AF: How does TT21C potentially negate the need for in vivo animal testing?

LS: TT21C focuses on changes in the normal cell signalling pathways that occur within the human body. Since the NRC released their report, TT21C methodologies have developed at pace, becoming increasingly prevalent across academia and in R&D programmes across multiple industries – including our own.

From Imperial’s perspective, this ability to replicate aspects of human pathophysiology in the labs allows us to better understand the potential biological impacts of both combustible cigarette smoke and our Next Generation Products (NGPs) such as aerosols from vapes and heated tobacco and tobacco-free oral nicotine pouch extracts. Replicating elements of human disease pathophysiology in this way, as well as using bioinformatics to interrogate the data to provide a system-wide, human pathophysiological map as a result of exposure to cigarette smoke and/or NGP aerosols, potentially allows us to gain an comprehensive understanding of the potential risks and benefits of our products on consumer health.

As a bonus, it may also mean traditional animal in vivo methods for biological testing eventually become redundant. That’s great news for science, and for the millions of animals still subjected to testing around the world every day.

AF: If it’s cell-based, how is TT21C is a legitimate framework for testing?

LS: Simply, the best predictive model for a human is a human. And the TT21C assays that have been – and are being – developed are typically based on human cells and related systems. They’re much better at predicting the biological effects seen in people compared to animals

For instance, toxicology testing has traditionally relied primarily on a complex array of studies to evaluate observable outcomes in live animals – like clinical signs or pathological changes – that may be indicative of a disease state, as a result of exposures to chemicals. However, the mechanisms driving these processes are still not well understood, which leads to translational issues when extrapolating the data from animals to humans – as well as high failure rates of pharmaceuticals in clinical trials.

TT21C methods can potentially provide us with a deeper understanding of exactly how human cells are being affected and their responses, and at what concentrations this occurs. Animal studies – which examine a single endpoint – don’t provide the same detail. Quite simply, humans aren’t large rodents so it’s difficult to extrapolate the data. For instance, with regards to NGP research, the most frequent source of concerns is from live animal and animal based in vitro studies which have unclear relevance for human exposure. 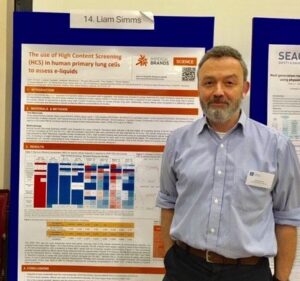 Dr Liam Simms reporting in his research at a conference. Image: NC3Rs

AF: What is Imperial Brands position on animal testing?

LS: We don’t commission or conduct research involving animals – and wouldn’t unless formally required to do so by governments or recognised regulatory authorities. While we’re proud of this stance, animal studies may have a place in helping scientists as they model complex organ interactions. That being said, in vitro technology is developing at a rapid pace, with ‘organs on a chip’ being developed to try to answer these questions. That’s another reason why TT21C assays are potentially such an important development.

AF: How does TT21C potentially impact Imperial Brands and our product portfolio?

LS: It’s now generally accepted that, for adult smokers, the greatest health risk stems from burning tobacco and inhaling the smoke. It’s the most harmful way to consume nicotine, and a cause of serious disease in adult smokers.

Historically, various regulatory approved in vitro toxicological assays –  including Ames, In Vitro Micronucleus and Neutral red uptake assay – were designed to assess the mutagenic, genotoxic and cytotoxic potential of cigarette smoke, processes which are associated with the development of cancer and other diseases.

However, assays like these don’t address other, health endpoints related to cigarette smoke like cardiovascular disease, emphysema and cancer. We believe TT21C-based methodologies may offer us another, better option.

AF: How is Imperial specifically using TT21C in its research currently?

LS: Our TT21C research programme began in 2016. During the last 3 years, we’ve invested heavily in this area and have been exploring the option of using a TT21C-driven approach to assess NGP aerosols compared to cigarette smoke. The results have been very promising, showing the tobacco harm reduction potential of our NGPs relative to continued combustible cigarette smoking, highlighted by the acceptance of several of our studies into the peer-reviewed scientific literature. 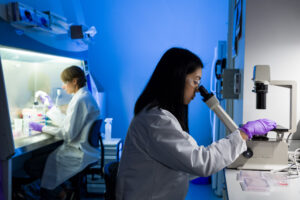 AF: What part of the research do you personally find most exciting?

LS: 3D lung models are a sophisticated in vitro assay, replicating areas of the human lung using different types and layers of cells. This promising assay is extremely comparable to the human respiratory system. This means there’s potentially a great deal it can tell us about the lung and endpoints for various diseases, including emphysema, when examining the biological effects of inhaled products.

Even at the highest dosage, myblu did not cause any significant changes when compared to the control (ambient air) under the conditions of test. In contrast, combustible cigarette smoke induced a significant change in dose-response in all the assessed endpoints.

As well as demonstrating the clear harm reduction potential of vaping relative to smoking, this assay suggests standardised lung models could be utilised not only in our NGP research, but also in human-relevant risk assessment across the wider vaping industry. In other words, they could help provide a product stewardship framework to significantly improve broader e-liquid safety and quality testing. That’s exciting!

AF: How is this TT21C science then practically applied to products?

LS: After we’ve looked at multiple assays related to different areas of smoking related disease, we use a weight-of-evidence approach to draw initial conclusions around what this range of assays tell us about our products.

If our biological research suggests the NGP under test is potentially less toxic to cells, we’ll analyse these results in conjunction with broader research conducted under our Scientific Assessment Framework. Studies include product characterisation, clinical, perception and behavioural, plus post-marketing assessment to determine if the product’s harm reduction potential relative to continued combustible cigarette smoking. 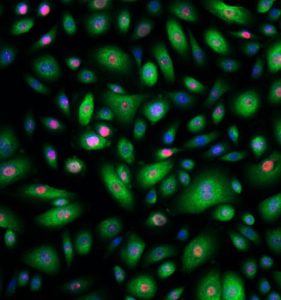 AF: How widely recognised are TT21C methodologies with regulators at the moment?

LS: TT21C has incredible potential, but it’s still an emerging toxicity framework in some ways – not least because it’s just over a decade young. This means there’s still lots to do in terms of educating regulators, media and consumers around its advantages.

However, we’re confident many TT21C methods and assays will become established as future regulatory standards. Several agencies have already indicated their keenness to encourage this shift: the most high-profile arguably being the US FDA, who have previously acknowledged the need for New Assessment Methodologies (NAMs) with the Tox21 programme and roadmap.

We continue to scientifically engage with regulators to increase the knowledge and acceptance of approaches including TT21C as more ethical and most importantly, more human relevant assessment of NGPs in the future.

AF: What’s the future for Imperial and TT21C?

As Imperial Brands continues to offer adult smokers potentially harm reduced alternatives to combustible tobacco through our NGP portfolio, we’re increasingly drawing on – and conducting cutting-edge science – that I believe also has the potential to help shape the future of wider biological research outside of tobacco and NGPs.

In my opinion TT21C is a real toxicological game-changer and I’m proud to be involved with our work on it.

Our scratch wound assay is just one example of the way we’re using next-generation TT21C in vitro methodologies to substantiate the harm reduction potential of our NGPs.